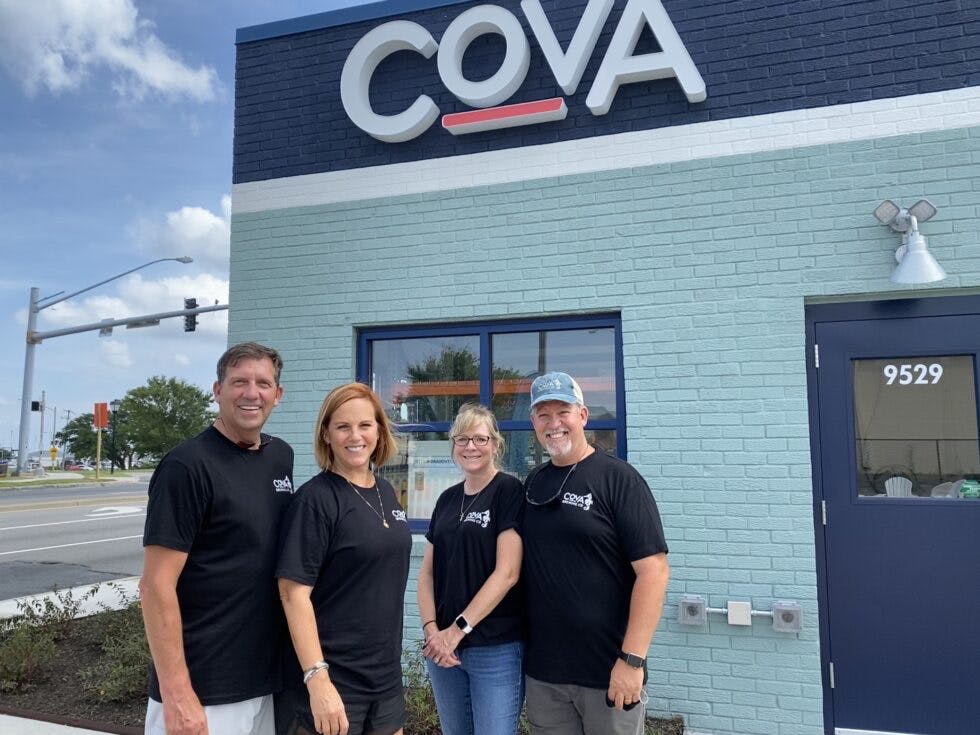 To brew or not to brew? That is the question.

For Scott and Susan Bateman, the answer was “two brew.” Blending the family’s love of craft beer and daughter-in-law Corrie’s barista experience, they decided to open a brewery where they could brew both beer and fine coffees in the Ocean View section of Norfolk. COVA (short for “Coastal Virginia”) Brewing Co is at 9529 Shore Drive, across the street from the marinas near East Beach and Joint Expeditionary Base Little Creek.

Scott and Susan are both Norview High School graduates, and Scott is an ODU alumnus, class of 1985 and a Theta Chi. Back in 2017, the Batemans were sitting in a brewery in Norfolk and thinking about the need for a brewery in their native Ocean View. Like many homebrewers, they had a dream of opening a brewery, and at that time Ocean View was a ‘craft beer desert’ without a single brewery or craft beer bar. Scott and Susan took a leap of faith and decided to open a hybrid brewery-coffee bar that would give the community a place to sip their beverage of choice. In addition to beer and coffee, COVA has wine, cider, and delicious homebrewed kombucha.  They are family friendly, pet friendly (outdoors), and even wine-drinker friendly.

Partners Phil and Karla Smith are relatively new to the neighborhood, having relocated to the Norfolk area from Ohio. They learned about the Bateman’s vision and joined forces to help make the dream a reality. Phil’s dad is a part of advertising history; perhaps you’ve heard some of the slogans he did for Miller Brewing, like “Tastes Great, Less Filling” and “Everything You Always Wanted in a Beer and Less.” Pretty cool, huh? That’s, like, beer-famous!

The highly skilled artisans at Spacemakers did the build out, and this former tire supply shop now boasts a gleaming seven-barrel brewhouse, a light-filled tasting room with blond wood tables, self-serve taps, and a coffee bar. The interior is bedecked with subway tiles in white and a pale aqua-mint reminiscent of sea glass or clear Caribbean waters. Outside is a very spacious seating area with well-spaced picnic tables, Adirondack chairs, high-top four-tops, and a covered patio.

Every brewhouse needs a brewer. Matt Topping was Head Brewer at Coelacanth Brewing, and after that brewery’s demise he found a home at COVA. We’re happy to say that Matt is doing a fantastic job and the beer at COVA is delicious. In early July four of their beers were on tap; a Pilsner, an IPA, a gose, and a coffee stout.  There was also an Extra Special Bitter collaboration with Elation Brewing, a Blue Toad Hard Cider, and a session IPA from Brothers Craft Brewing. While the specific beers will rotate and vary, they plan to always have the range of styles cover light, hoppy, sour, and dark. We were delighted with the quality of the beers.

The Pilsner is crisp and clean, and sessionable at under 5% ABV.  An easy-drinking, beautifully balanced, well carbonated people-pleaser of a beer. Great before, after, or instead of the beach.